The world’s second-largest athletic company unveiled its first “barefoot” training shoe Tuesday, which is designed to mimic the experience of exercising barefoot while providing the protection, traction and durability of a shoe. The Adipure Trainer, which is a cross between a glove for the feet and a traditional shoe, hits U.S. stores in November priced at $90.

The barefoot shoe is part of a strategy by Adidas, which is based in Germany, to expand into the U.S. where rival Nike dominates. Adidas joins a list of athletic makers trying to tap into the small but burgeoning U.S. market of fanatical runners and gym-goers who swear by shoes designed with as little material between the wearer and the ground as possible. 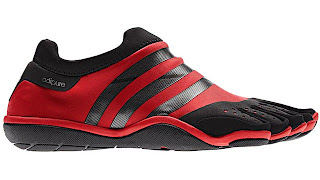 “People who believe barefoot is the way to go…are very emphatic about it,” said Matt Powell, an analyst with industry research organization SportsOneSource Group. “They want to spread the message. It sounds religious but some of them are evangelical about it.”

The athletic shoe and clothing business has been fairly resilient during the U.S. economic downturn, but it is an industry that thrives almost entirely on new products. When it comes to shoes, the latest and greatest captures the U.S. customer. While barefoot shoes make up a tiny fraction of the $22 billion U.S. athletic shoe industry, it is one of the fast-growing categories. Sales have more than doubled in the past year to roughly $750 million, according to SportsOneSource.

The barefoot shoe movement has been fueled by the barefoot running culture, which has long had proponents, but caught on more widely in 2009 after Christopher McDougall’s book “Born to Run” explored the history and benefits of it. The theory is that running barefoot enables the body to move naturally and optimally, while traditional shoes inhibit that.

The movement gained more traction last year when Harvard biologist and runner Daniel Lieberman published a paper in the journal Nature that concluded that running barefoot seems to be better for the feet, producing far less impact stress compared to those in traditional running shoes.

The practice of running in barefoot has been a somewhat controversial topic, though. The odd appearance of the shoes sometimes causes heads to turn in parks. Some races across the country will not allow people to run in them. And some barefoot shoe wearers themselves have reported injuries after using them.

Shoemakers and health professionals say many of the injuries are a result of people using the shoes too quickly. They suggest people trying to make the switch from traditional shoes to barefoot ones do so gradually —- increasing distance over time —- to let the body adjust to how it naturally is meant to move.

“A lot of engineering went into making your foot a high performance machine,” said Mark Verstegen, founder of Athletes’ Performance, a training and performance organization for elite athletes that works with Adidas. “Using your foot’s natural power and movement will help you strengthen muscles you never knew you had in your feet, lower legs and throughout your core.”

Athletic companies have rushed to jump on the growing barefoot trend. Big companies such as Merrell, Fila, Saucony, Asics and New Balance all are offering their own barefoot or so-called minimalist shoes.

Nike, the world’s biggest athletic company, has roughly 65 percent of the market and appeals to barefoot loyalists and mainstream exercise enthusiasts alike with the traditional running-shoe look of its “Free” line. Vibram has about 10 percent of the market with its Five-Finger shoe, which encases each toe separately and has come to define the style.

The design of the Adidas barefoot shoe strikes a balance between the two styles. The brightly-colored trainer, which features the trademark Adidas three stripes, covers the foot as a shoe would but with a sock-like fit and toe compartments to allow more natural movement.

“The Adipure Trainer is a unique piece of equipment for elite level athletes that we’re bringing to our core consumer,” said Patrik Nilsson, president of Adidas North America.

The growing barefoot market is an important one for Adidas as it tries to gain U.S. customers. The company runs a close race with Nike globally, but the gap is much wider in North America.

In their most recent fiscal years, Nike generated $7.58 billion in revenue in North America. Adidas, meanwhile, had roughly $4.05 billion in revenue when translated to U.S. dollars. Nike holds 48.2 percent of the market share in U.S., while Adidas comes in at a distant second with 11.7 percent.

Adidas, which recently has seen its sales improve in North America, has implemented a growth strategy that relies heavily on gaining market share in the U.S. The company said it is trying to connect better to U.S. consumers through new products and marketing.

The company, which has long relied on its strength as a soccer and lifestyle brand, has put a bigger push behind other sports that are big in the U.S. as well. In basketball, for example, it’s expanded its products in recent years and signed Chicago Bulls player Derek Rose, who was the NBA’s most valuable player this year.

“To be successful is damn hard work day in and day out,” said Herbert Hainer, CEO of Adidas speaking from the company’s U.S. headquarters in Portland. “It’s not just basketball or having Derek Rose or Tiger Woods, or whatever. It’s a lot of different things all the time and connecting right with the consumer.”