by Fitcorp Asia - Fitness Experts / Friday, 14 May 2010 / Published in Uncategorized 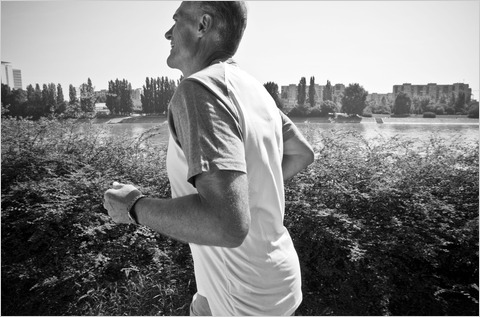 An exciting discovery in science, on how exercise keeps your cells young, and in doing so, slows down the aging process.

WOW, now its proven, exercise does keep you young. The following article was provided by the New York Times.

Scientists in Germany gathered several groups of men and women to look at their cells’ life spans. Some of them were young and sedentary, others middle-aged and sedentary. Two other groups were, to put it mildly, active. The first of these consisted of professional runners in their 20s, most of them on the national track-and-field team, training about 45 miles per week. The last were serious, middle-aged longtime runners, with an average age of 51 and a typical training regimen of 50 miles per week, putting those young 45-mile-per-week sluggards to shame.

From the first, the scientists noted one aspect of their older runners. It ‘‘was striking,’’ recalls Dr. Christian Werner, an internal-medicine resident at Saarland University Clinic in Homburg, ‘‘to see in our study that many of the middle-aged athletes looked much younger than sedentary control subjects of the same age.’’

Even more striking was what was going on beneath those deceptively youthful surfaces. When the scientists examined white blood cells from each of their subjects, they found that the cells in both the active and slothful young adults had similar-size telomeres. Telomeres are tiny caps on the end of DNA strands — the discovery of their function won several scientists the 2009 Nobel Prize in medicine. When cells divide and replicate these long strands of DNA, the telomere cap is snipped, a process that is believed to protect the rest of the DNA but leaves an increasingly abbreviated telomere. Eventually, if a cell’s telomeres become too short, the cell ‘‘either dies or enters a kind of suspended state,’’ says Stephen Roth, an associate professor of kinesiology at the University of Maryland who is studying exercise and telomeres. Most researchers now accept telomere length as a reliable marker of cell age. In general, the shorter the telomere, the functionally older and more tired the cell.

It’s not surprising, then, that the young subjects’ telomeres were about the same length, whether they ran exhaustively or sat around all day. None of them had been on earth long enough for multiple cell divisions to have snipped away at their telomeres. The young never appreciate robust telomere length until they’ve lost it.

When the researchers measured telomeres in the middle-aged subjects, however, the situation was quite different. The sedentary older subjects had telomeres that were on average 40 percent shorter than in the sedentary young subjects, suggesting that the older subjects’ cells were, like them, aging. The runners, on the other hand, had remarkably youthful telomeres, a bit shorter than those in the young runners, but only by about 10 percent. In general, telomere loss was reduced by approximately 75 percent in the aging runners. Or, to put it more succinctly, exercise, Dr. Werner says, ‘‘at the molecular level has an anti-aging effect.’’

There are plenty of reasons to exercise — in this column, I’ve pointed out more than a few — but the effect that regular activity may have on cellular aging could turn out to be the most profound. ‘‘It’s pretty exciting stuff,’’ says Thomas LaRocca, a Ph.D. candidate in the department of integrative physiology at the University of Colorado in Boulder, who has just completed a new study echoing Werner’s findings. In Mr. LaRocca’s work, people were tested both for their V02max — or maximum aerobic capacity, a widely accepted measure of physical fitness — and their white blood cells’ telomere length. In subjects 55 to 72, a higher V02max correlated closely with longer telomeres. The fitter a person was in middle age or onward, the younger their cells.

There are countless unanswered questions about how and why activity affects the DNA. For instance, Dr. Werner found that his older runners had more activity in their telomerase, a cellular enzyme thought to aid in lengthening and protecting telomeres. Exercise may be affecting telomerase activity and not telomeres directly. In addition, Stephen Roth has been measuring telomeres and telomerase activity in a wide variety of tissues in mice and has found, he says, the protective effects from exercise only in some tissues.

Another question is whether we must run 50 miles a week to benefit. The answer ‘‘can only be speculative at the moment,’’ Dr. Werner says, although since he jogs much less than that, he probably joins the rest of us in hoping not. Given his and his colleagues’ data, ‘‘one could speculate,’’ he concludes, ‘‘that any form of intense exercise that is regularly performed over a long period of time’’ will improve ‘‘telomere biology,’’ meaning that with enough activity, each of us could outpace the passing years.

The fear of getting “too big”